skip to main | skip to sidebar

I was on a movie marathon yesterday. I saw four movies back to back, prior to the start of “The Pianist”. This was my way of dealing with depression… getting engrossed in the innate thoughts of the less-minded screenplay writers and moviemakers. But there are occasions when a beacon of light stands out in all the muck and mire of Hollywood movies. “The Pianist” was one such. Adrian Brody’s brilliance in his characterization of Wladyslaw Szpilman brought back hope inside me and lifted my hitherto sagging spirit. 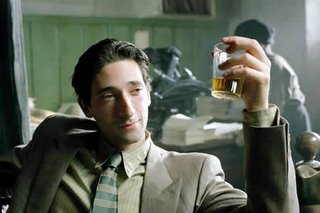 Made by Roman Polanski, the movie is based on the true story of Szpilman, a pianist who lived in Warsaw and his struggle to survive against all odds. For the uninitiated, the Historical Background section on this site http://www.thepianist-themovie.com/pianist.htm will give you a good insight into the life and times of the holocaust victims in Warsaw.

A couple of hours later the movie got over and a brief glance at the clock told me that it was 3:30am. I turned off the lights in an attempt to get some shuteye. But as was the case when I saw a war movie, the images kept running through my head endlessly.

Bodies were scattered everywhere… women, children, helpless old men. All dead…all of them were dead, their faces frozen in a nameless fear. “O what has befallen man! Why has he turned against his own kind? Why?!” But the soldiers never stopped shooting. It was not their place to think. Some of them had hearts and in some remote way they felt sorry for the people they were shooting down. Wrong. So very wrong! But their fingers kept squeezing the trigger, pumping bullets into helpless men, women and children. Chests and heads were exploding, chunks of flesh and bone ripped up and torn out of their bodies... how can they stop? That was unthinkable. To go against the Fuhrer! Unthinkable! They were the superior race! They were not at the other end of the gun barrel!

I got up, went to the kitchen and had a glass of water. Walking back to the bed, I rubbed the back of my neck. The clock read 4:45am. The light switch going off sounded like gunfire.

A woman running down the street gets shot in the back by a Nazi soldier. She falls down on her knees… slowly, ever so slowly… an unuttered cry caught in her throat, dead in its cradle! She bends over until her forehead touches the cold cobblestones and there she stayed as if bowing down to the ruthlessness of the unseen forces that brought such persecution and pain to her and her people.

Szpilman who after surviving the guns of the Nazi soldiers gets caught in another war altogether, the private war that he wages while he hides from the Nazis! Hunger can break a man where guns cannot. The dull ache in the pit of the stomach eventually stops and then comes back again but this time around your head starts throbbing too. That can drive a perfectly sane man to the other side! But what was Szpilman’s secret? How could he survive his mental anguish for years... till the Russians marched into town and drove the Nazis out? And that’s when I see the answer in the form of Szpilman sitting in that dark gloomy room, guns sounding in the distance, a calm serene look on his face as his fingers dance in the air as if floating on piano keys, the notes playing in his head, the rhythm guiding his soul, soothing it. His life, his passion… his comfort!

I looked at the sunlight filtering in through my bedroom window, faintly at first but gaining in strength as the seconds ticked by. The holocaust was a tragedy of monumental proportions, a scar… a blemish on the face of the entire human race. One would think that such a scar would cause us to smarten up, pick up our act and learn from our mistakes. But … look around you… the world has almost but forgotten the screams, the pain… for here we are … at it again… spiraling into yet another tragedy. Its five minutes past six and I could hear the Pianist playing ... the notes swirling through my mind like a whirlwind as I fall into a deep sleep.
Posted by ikencliff at 10:19 PM No comments: